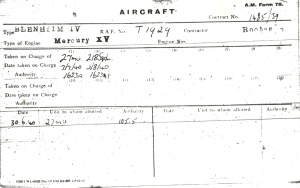 The squadrons run of bad luck continued on Sunday August 18th when “B” Flight was ordered to carry out a formation exercise.  Aloft from RAF Oakington the flight were carry out a series of routine formation manoeuvres when Blenheim T1929 flown by Flight Lieutenant George Edward Newton collided with Blenheim L9264 flown by Pilot Officer William Wheelwright .

Blenheim T1929 almost immediately caught fire in the air and dived into the ground and burst into flames while L9264 went into an inverted spin. The Blenheim smashed into the ground but did not explode or catch fire.  Sadly all the occupants of both aircraft were killed. All this happened within a few short miles of the aerodrome. Tragically flying aboard T1929 was 23-year-old flight mechanic Robert Harrison who’s reason for flying is not known however unsupported information states that he had recently carried out an engine repair to T1929.

Flight Lieutenant George Newton had arrived on the squadron on July 29th to assume the “B” Flight commander role. He had been commissioned in May 1936 having trained at 10 FTS, Tern Hill, he was by this time a season pilot.

The funerals of those airman buried at Long Stanton Churchyard took place of August 21st at 14:30hrs. The bearer party and Escort Party were provided by the station while the attending party consisted of 3 officers from the squadron.  One officer and other ranks from the 6thRoyal Sussex Regiment also attended.

The Court of Inquiry was carried out on August 20th 1940 under the Presidency of Wing commander D H F Barrett of No.40 Squadron. Flight Lieutenant Hughes DFC from the squadron attended as did the squadron engineering officer, Flying Officer Mathews.

Married to Doris May