“For Your Tomorrow We Gave Our Today”

Twenty-one year-old Adrian Brace arrived on No.218 (Gold Coast) Squadron on the afternoon of Thursday 29th July 1943.  The crew captained by the fresh faced pilot from Newport Wales had only  completed their conversion to the Short Stirling at No.1651 Conversion Unit based at RAF Waterbeach the day before.  Only a few years prior Adrian a regular church goer had started his training to becoming a Vicar.   Good luck was obviously on their side as unlike the proceeding new arrivals the Brace crew had time to settle into their new surroundings. The squadron had over the preceding weeks suffered its fair share of losses, including the highly regarded and experienced squadron commander, Wing Commander Don Saville DSO, DFC.  The loss of such an experienced bomber pilot had dented the morale on the squadron such was his very high regard. Thankfully the flight commanders Squadron Leader Herbert Saunders DFC RCAF, Squadron Leader Ian Ryall DFC and Squadron Leader Frederick Austin DFC had the experience and personalities to fill the void left by the likable Australian.

Adrian undertook a 2nd pilot trip with Sgt Michael Nesbitt of No.623 Squadron on August 10th, the target was Nuremburg which was successfully attacked. It would not be until Sunday August 22nd 1943 that the crew would undertake their first operation, the target was the minefields code named NECTARINES II situated off the long chain of Frisian Islands.

The crew were aloft at 20:55hrs from RAF Downham Market in Short Stirling EF449 HA-P it would be a successful baptism of fire as the crew successfully located their mining area and dropped  their load of five sea mines, they were back at dispersal at  00:35hrs. On Wednesday 25th the crew undertook their second operation, once again a mining trip, this time to the Deodar area located in the mouth of the Gironde estuary.  The target was once again successfully located and two mines were dropped from a perilously low altitude 800ft, one mine hung-up and was brought home, the crew were aloft for over six hours.

The settling in period was now well and truly over as the crew’s next operation was to southern Germany, Nuremburg. This was attacked without difficulty, the all incendiary load was dropped on a bunch of well-placed Green Target Indicators. The crew landed at RAF Manston an emergency airfield in Kent on return. One crew from the squadron failed to return.   On Friday 30th the target was Munchen Gladbach, the squadron dispatched 9 crews, two returned early one of which was the crew of Pilot Officer Brace. The starboard outer engine of Stirling EE949 HA-G overheated while over Holland forcing the crew to abort, the all incendiary load was jettisoned 3 miles SE of Knocke. Two experienced crews failed to return from this operation.  The crew did not have long to operate again, the following night the German capital Berlin was the target. Eight crews were detailed and briefed, Adrian departed Downham Market at 20;30hrs at the controls of EF937 HA-S. The crew experience heavy flak over the city but once again managed to place their all incendiary load on a cluster of Green Target Indicators from 17,300ft. The weary crew landed at 04:45hrs after being aloft for 7 hours 36  minutes.

A well-deserved rest from operations followed, the crew were not required until Sunday September 5th when Mannheim was the intended target. The recently promoted Flying Officer Brace was airborne at 22:00hrs in EE937 HA-A regrettably  the crew were forced to return when Adrian was taken ill on route, the bombs were jettisoned and a safe landing was made back at base.  There followed a 10 day break from operations, one can only speculate this was to give Adrian time to recover from his sickness. The Station Sick Quarters only comment was that a crew member experienced “sickness”.  It was Wednesday 15th before the crew operated again, the target was the Dunlop rubber factory at Montlucon, France. The crew carrying 4,560lb of incendiaries bombed at 23:34hrs onto a smoke covered target, as the crew turned for home a large explosion was seen. The following night it was back to France and the important France to Italy rail yards at Modane . The squadron dispatched 15 crews lead by the squadron commander Wing Commander William Oldbury. Adrian bombed from 16,00ft dropping his 4 x 1000lb & 2 x 500lb HE on a circle of green target indicators, sadly the marking by the Pathfinders was inaccurate due to the target being located in a steep valley, only minor damage was inflicted.  It was back to Germany again on Wednesday 22nd with Hannover the intended target. This was the first major raid on this city in over two years and would see the start of  a series of four heavy raids over the coming weeks. Fifteen squadron crews were part of a force of over 700 bomber that bombed the target in clear conditions. Adrian and crew accurately bombed a series of well-placed target indicators from 16,500ft. The crew landed back at Downham Market at 00:35hrs, sadly the raid had been costly, two squadron crews had failed to return and one had crashed on return to England. The mess that night must have been a sombre place.

The squadron did not have long to contemplate the loss of their  friends, the following night the squadron dispatched 12 crews to Mannheim, code name “Eel” with the intention of destroying the northern part of the city.  Adrian and crew were aloft at 19:25hrs in EJ104 HA-G a new Mk.III Stirling which had only arrived on the squadron a few weeks before.  The crew left the English coast over Clacton and headed towards the Dutch coast, the squadrons of No.3 Group were part of the second wave and were scheduled to bomb between 21:52hrs and 21:57hrs.  On this night the Germany defences were quick to engage the bomber stream near Aachen, however they were late in identifying Mannheim as the target, it was not until seven minutes into the attack that German night fighters appeared in force over the city. A total of 34 combats took place over the burning city,  including the encounter that would witness the loss of the crew of Flying Officer Adrian Brace.

At 23:00hrs the German ace Oblt Heinz Wolfgang Schnaufer flying a Me110 of 12./NJG1 engaged a Short Stirling at 15000ft above Bauwaldtal (Kirchheim-Bolanden) located on the outskirts of the target. The encounter resulted in the Stirling exploding in mid-air killing all the crew apart from Sergeant Reginald Smith the crews wireless operator. Miraculously Reginald survived, he ended up in hospital badly wounded but otherwise alive, he was repatriated aboard the Arundel Castle February 6th  1945.  It was not only Oblt Heinz Wolfgang Schnaufer who claimed EJ104, the following German Flak units also made claims for its destruction, 3&4/701, 2&3/636, 5/492 and 1&4/499 Flak Regiments submitted a claim for a Stirling at 23:00hrs flying over Bauwaldtal at 10,000ft.  Could the crew have survived the encounter with Oblt Heinz Wolfgang Schnaufer only to fall victim to flak, we will never know.

The crew of Flying Officer Adrian Brace had lasted a mere 57 days, in that time they had encountered their fair share of difficulties, but overcome each of them with skill and courage in the true tradition of the squadron and Bomber Command.

All the crew are now buried in the Rheinburg War Cemetery, 21-year-old Flying Officer Adrian Colebrook Brace RAFVR is buried in Grave 21.B.2.

The final resting place of a brave young captain.

Such was the high esteem that the local parishioners of St Lukes Church Abercarn south Wales had for Adrian that they presented Adrian parents with an inscribed prayer book. 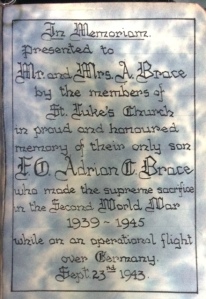