The association would like to pass on its sincere condolences to the family of Ron Brown at this sad time.

A brief overview of Ron’s career with No.218 (Gold Coast) Squadron, No.3 Group, RAF Bomber Command. 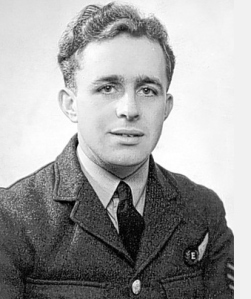 Ron, and his original pilot P/O Sheldon did their Short Stirling conversion course with No.1653 Con.Unit based at RAF Chedburgh, Suffolk. Conversion began in late April 1944 under the watchful eye of Flying Officer Michael Nesbitt DFC, a screened former pilot of No.218 Squadron and No.623 Squadron. Over the next three weeks, the crew carried out a total of 21 training flights, amassing a total of 39 hours, 50 minute flying time.

With conversion complete, the crew arrived at No.218 (Gold Coast) Squadron based at RAF Woolfox Lodge, where they joined “B” Flight, commanded by the experienced Squadron Leader Phil Brentnall. Ron’s first flight was on May 22nd, when he and his crew carried out a local cross country flight in Short Stirling EJ112 HA-Q. This was followed by a further three during the remainder of May.

Rons first operational sortie was on June 10th 1944, in Short Stirling LJ522 HA-N when the crew successfully carried out a mining operation to “IRIS 2” garden area off Knocke. This was followed on the 16th by another mining trip, this time to the “Nectarines I” area. Six magnetic mines were planted from the perilously low attitude of 1000ft, a dangerous and perhaps suicidal height given that German naval flak ships operating in the area.  The crew were given the opportunity to bomb on the 17th, when twelve Stirlings of 218 Squadron were tasked to bomb the important railway gulley at Montdidier, situated north of Paris. Aloft at 01:08hrs in Stirling LK396 HA-M the crew found the target well ablaze on their arrival, they added to the destruction by dropping their 22 x 500lb HE’s from 6,000ft on the Master Bombers instructions. The Sheldon crew carried out one further operation in June, when on the 24th they mined the waters off the island of Ushant, code name “Sultana II”. Six mines were planted, EF124 HA-R landed after being aloft for 4 hours 30 minutes.

It was back to mining on July 8th , when a successful trip to the “Jellyfish” garden area off Brest was flown, at the controls of LJ521 HA-J was the recently promoted Flight Lieutenant Sheldon. On the 17th the crew once again had the opportunity to bomb when they were part of 15 Stirlings dispatched by No.218 Squadron to bomb V1 site at Mont Candon.

On July 20th the crew of F/Lt Sheldon were ferried by F/Lt Stirling RAAF to RAF Feltwell for conversion to the Avro Lancaster. The crew’s first Lancaster flight was recorded on July 25th when a 1 hour 55 minute flight was completed, a further three flights are recorded in Lancaster’s “O” – “R” and “W”.

On August 9th Ron carried out his first Avro Lancaster operation, the target was the fuel dumps at Fort D’Engles in Lancaster LM281 HA-T. The attack was carried out in good visibility as 14 x 10000lb GP were dropped from 14,000ft on a number of closely grouped TI Markers. On the 12th it was Ron’s first operation over Germany, the target was Opel Motor Works at Rüsselsheim. The operation was not a success, PFF Markers were scattered and the Master Bomber was extremely difficult to hear, the result of which was that most of the bombs fell in open countryside south of the intended target. One squadron crew failed to return from this raid, Ron’s crew landed after 4 hours 45 minutes.

A massive day-light operation was flown on the 15th, when over 1000 bombers drawn from all Bomber Command Groups attacked 9 airfields in Holland and Belgium. No.218 Squadrons contribution was just three crews, one of which was F/Lt Henry Sheldon. The crew departed RAF Methwold at 10:20hrs aboard Lancaster LM258 HA-C, the Lancaster slowly gained altitude and headed over the East Coast loaded with 11 x 1000lb plus 4 x 500lb HE’s. Conditions over the target, St Trond airfield, were ideal, opposition was almost non-existent as the crew bombed on a compact group of red Target Indicators from 16,500ft. The crew upon their return reported the bombs were seen to explode all across the airfield, it had been a total success. Ron’s last operation on No.218 Squadron, his tenth would be his longest and perhaps most difficult. On August 26th Ron and crew were detailed and briefed to attack Kiel. Ten squadron crews were part of a force of 372 Lancaster’s and 10 Mosquitoes of No.1, 3 and 8 Groups detailed to attack this hotly defended target. On the crews arrival the town was ablaze, fighter flares drifted over Kiel, flak was intense and searchlights active. Numerous fighters were seen as the crew of PD223 HA-U started their bomb run. A number of accurately placed red and green TI’s were all the crew needed to unleash their 1 x 4000lb “Cookie and 108x30lb plus 950x4lb incendiaries from 18,000ft in to the inferno below. The crew turned for home, knowing that the raid appeared at least to them, a complete success. They were back at their dispersal after a 4 hour 55 minute flight.

Avro Lancaster PD223 HA-U. This is the aircraft that Ron flew on the raid against Kiel. The Lancaster is seen here in 1945 with the crew of F/Lt Alf Cowley RAAF. The aircraft was a GH Leader aircraft, denoted by the two horizontal yellow bars on the rudder.

Ron had flown a total of ten operations with No.218 Squadron amassing a total of 78 hours 40 minute flying time. Ron’s pilot was posted NES of RAF Methwold on September 9th , the now pilotless crew were posted to “B” Flight  of No.75(NZ) Squadron based at RAF Mepal. Rons crew was taken over by the determined and experienced New Zealander, Squadron Leader Rodgers. Over the next four months, Ron attacked some of Germany’s most hotly defended targets, Essen, Cologne, Homburg, Dortmund and Duisburg were but a few recorded in Ron’s Log Book.  Ron carried out his 30th and final operation on January 13th 1945, the target was Saarbrucken. Ron Brown, Flight Engineer  operational flying hours totalled an impressive 129 hours 50 minutes, his total flying hours was 204 hours  5 minutes.

A recent photograph of the late Ron Brown.

Ron Brown was an active member of the Bomber Command Association and recently heavily involved in gathering former veterans together for the arrival of the Canadian Wartime Heritage Museum Lancaster during 2014. Ron wrote a book “Per Ardue Ad Astra” about his RAF career.  Sadly it was  soon after the publication that 218 Squadron Association made the decision to distance itself from the book  due to some of the content.